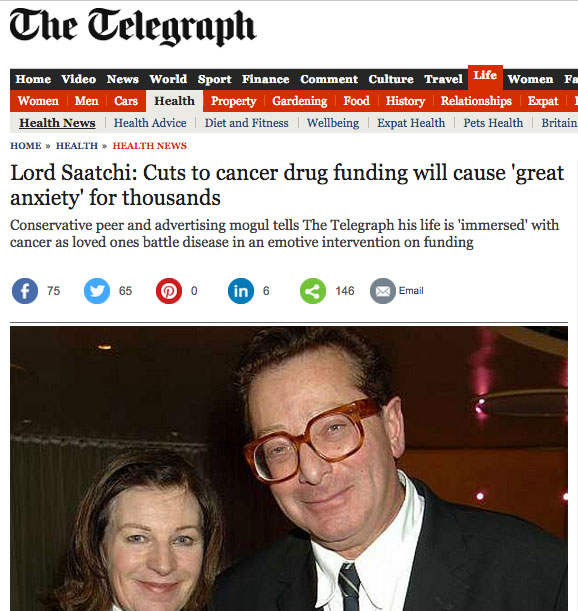 Published in the Telegraph By Ben Riley-Smith, Political
12 Jan 2015

Thousands of Britons with cancer will be plunged into “great anxiety” because of cuts to crucial drug treatments announced on Monday, Lord (Maurice) Saatchi has warned.

The Conservative peer and advertising mogul told The Telegraph his life has been “immersed” with cancer recently with loved ones battling the same disease that took his wife as he criticised the scaling back of NHS funding.

It comes as charities and industry experts warned that NHS England’s expected decision to stop funding a series of cancer drugs was “short-sighted” and would endanger lives.

A review by the Cancer Drugs Fund, introduced in 2011 after the Conservatives pledged cancer patients would no longer be denied drugs on grounds of cost, is published today.

As many as half of the 25 drugs under review – which are used in 42 treatments – could have funding pulled according to industry sources.

The move comes amid spiralling costs, with the initial £200 million budget set aside by the Coalition already having increased to £280 given demand.

However the expected ‘delisting’ of potentially life-changing drugs has triggered uproar from cancer charities who fear the impact of pulling the funding on future patients.

Lord Saatchi, whose Medical Innovation Bill is being debated in Parliament and would increase the ability of doctors to try out new medicines on willing patients, said the funding cuts were of “great concern”.

“There is a sense of possibility with the Cancer Drugs Fund. Withdrawing funding is going to cause people who would potentially benefit from the treatments great anxiety,” Lord Saatchi told this newspaper.

However he noted that the fund could never alone answer why there has not been more innovation in cancer treatments and called for “big, cultural, systematic change”.

“I am immersed with cancer as friends and loved ones around me suffer from the same disease which also took my wife [the novelist Josephine Hart],” said Lord Saatchi.

“What I faced – as thousands do across the country – is the problem that doctors are only able to use those tools that are in front of them.

“I don’t want cancer patients to be told drugs can only stem their dying – that is a guarantee of failure. I want us to give people the opportunity to try to survive.”

It is understood pharmaceutical companies were given until the end of Friday by NHS England to justify why cancer drugs they produce should still receive funding.

At least eight life-extending treatments will be denied funding, with drugs that offer a last chance to patients with breast, prostate and bowel disease among those affected.

Prof Karol Sikora, chief medical officer at Cancer Partners UK and one of the country’s leading cancer experts, told The Telegraph the situation was “very sad”.

“Why cant the NHS negotiate better with the pharma industry so that our patients can have equivalence with the rest of Europe? Sure these are all expensive but lives have been prolonged significantly,” he said.

“To know that there is a drug out there that might give you a chance and to be turned down is not what our patients need.”

In a letter to this newspaper, Jonathan Emms, president of the Association of the British Pharmaceutical Industry, warned against the NHS cutting funding for medicines.

“The NHS already spends less than £1 in every £10 on medicine. Further cuts would be short-sighted and compromise patient care,” he said.

“Innovation in medicines is moving faster than the health system can deliver to patients. The NHS needs to catch up.”

Danni Manzi, head of policy at Breast Cancer Care, said: “This re-evaluation shows yet again that the Cancer Drugs Fund is not fit for purpose. We hope that none of the breast cancer drugs are removed due to cost.

“Having secondary, incurable breast cancer is devastating – and these patients should be entitled to improved quality of life and extra time with their loved-ones.”

“Until this is resolved cancer patients could miss out on vital treatment. We must urgently find a long-term, sustainable system that works.”