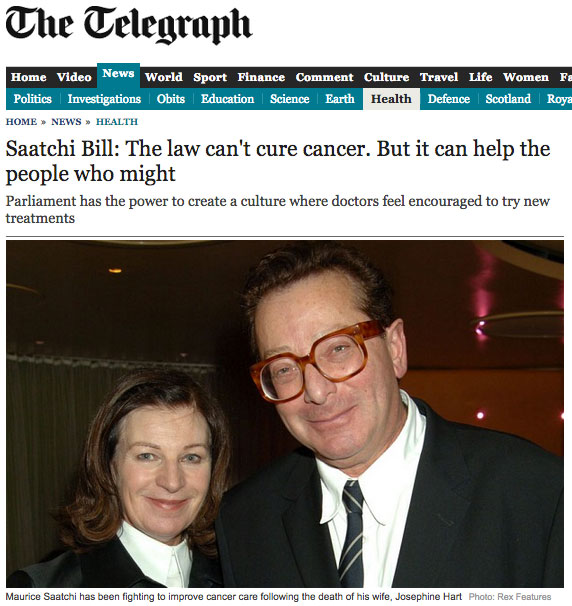 Published in the Telegraph 22nd January 2015

Cancer and its treatment is the number one cause of the untimely death of British citizens. There were around 165,000 cancer deaths this year – the same as last year and the same as next year.

Apparently, cancer is so complex that it is beyond the judgment and understanding of the human mind to comprehend all its variables.

This point was confirmed in a recent study by scientists at America’s distinguished Johns Hopkins University which concluded that many cancers are “just bad luck”.

The law cannot cure cancer. Parliament’s power, though awesome, is not sufficient. Only science can do that.

But the law does have the power to change the culture. Consider its impact on race, drink-driving, smoking in public places. No amount of exhortation or guidance from on high could have achieved what the law has done. No one would consider smoking in a restaurant today.

The Medical Innovation Bill, which tomorrow returns to the House of Lords for its third reading, does not offer some miracle treatment for a sofar incurable disease. But it will, I believe, encourage the men and women who will who find those cures.

This is why I hope the House of Lords will decide to pass the Medical Innovation Bill – a Bill that has been strongly supported by The Telegraph from the start – and send it to the House of Commons for approval.

This follows 18-months of line-by-line scrutiny by some of Britain’s greatest judges, doctors and scientists, with safeguards designed by Sir Bruce Keogh, Medical Director of the NHS and with the approval of the Government and many thousands of doctors and patients.

Here is the situation for many people today. When a patient with cancer or a child with a degenerative disease – such as Duchene muscular dystrophy – is handed a terminal diagnosis, when the doctor says there is nothing to be done other than offer standard treatments which are known not to work, two things happen.

First, the patient dies. Second, medical science is halted in its tracks by the repetition of the same, failed experiment. Doing the same thing, offering the same treatment, knowing it won’t work is madness.

Today, the law protects the doctor who carries out only standard procedures. It says that that doctor cannot be sued if – as it always will – the treatment fails.

My Bill won’t change that. A doctor can continue safely and legally prescribing the standard therapies if they wish. There will be no obligation to innovate. What the Bill will do is offer the same protection to a doctor who offers an innovative treatment to the dying patient – in advance of the treatment taking place, as long as they can get the support of at least one other relevantly qualified doctor.

It will encourage them to think beyond the standard treatment. It will allow them to see what else might – only might, for there are no guarantees – make a difference to the dying patient.

It will change the culture of defensive medicine to one where the balance of risk is gently recalibrated making it permissible to consider trying something new, something less well documented than the well-worn path to death.

And lest there be any doubt about what is responsible for the culture of defensive medicine, look at the facts. Last year we, the taxpayer, paid out £1.2bn to meet negligence claims against the NHS, a figure that has doubled in five years. According to the Treasury, we the people have a further liability for a staggering £26bn, up £2bn since last year.

Many who have had concerns about the Bill have pointed out that if it is to make a difference to medical science, then the results of innovations need to be documented and be shared so that other doctors and scientists can make use of the results – avoid the failures and try to repeat the successes by setting up full medical trials.

Yesterday, the Genetic Alliance UK wrote to Lords saying it was vital that “registries are created to enable the collection and exploitation of real-world patient data, and promote the sharing of research findings and best practice.” The Government agrees that the collection and sharing of new data derived from innovation will both advance scientific knowledge and provide the accountability and transparence required for patient safety

The Bill encapsulates what is seen as by the top hospitals as best practice – that is discussing innovative treatments with expert colleagues in advance of that treatment. Doing this means that doctors can formulate the best options – and calculate the risks to the patient. The Bill says if doctors do this and write it all down and get the patient’s consent, they will be legally protected.

This is why I hope today my Bill, soundly tested, forensically analysed line by line by my colleagues in the Lords who number among them some of Britain’s top legal and medical brains – and amended by them – will pass to the Commons.

And it is why Regius Professor of Medicine at Oxford University Prof Sir John Bell says: “There will be no cure for cancer until real doctors with real patients in real hospitals can attempt an innovation.”